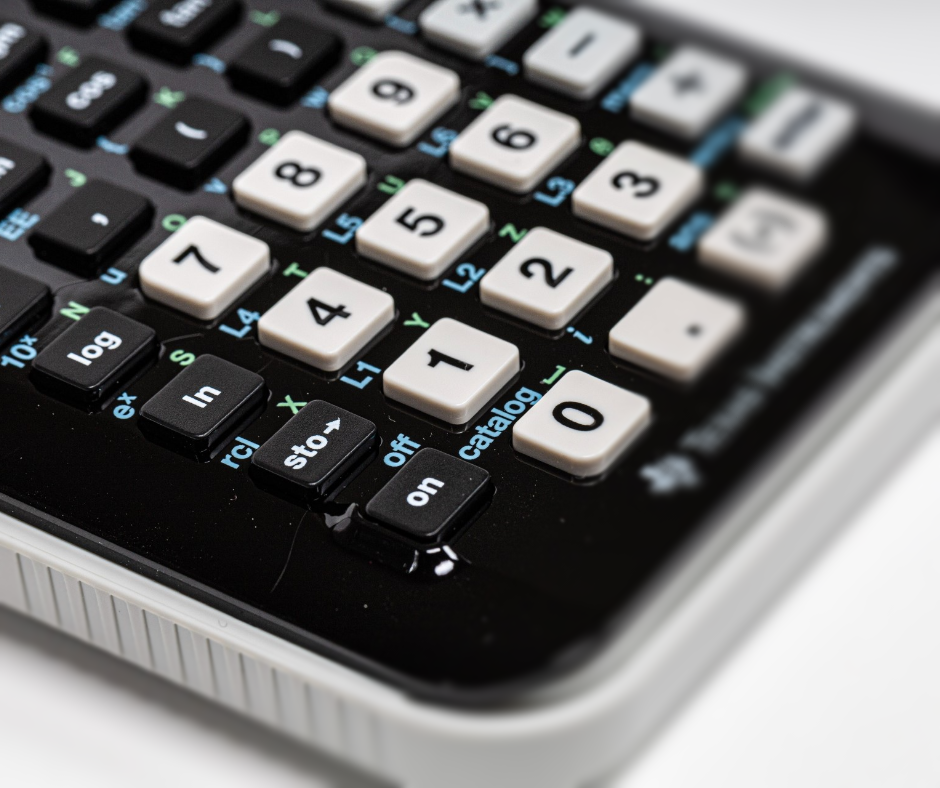 Episode 10, Season 34 of NBC’s hit show Saturday Night Live was, without a doubt, the most glorious moment in television history. At least, it was for me.

John Malkovich — known for his roles in Bird Box (a recent Netflix horror hit) and Warm Bodies (the only dystopian rom-com I’ve ever seen) — hosted, with rapper T.I. as the musical guest. But I didn’t care for Malkovich’s designer stubble or T.I.’s contagious rhymes. Episode 10 earned a special place in my heart with its “Calculator Christmas Gift” sketch.

If you haven’t seen “Calculator Christmas,” you’re missing out. In the sketch, Malkovich and Fred Armisen play Aiden and Glenn, twin brothers who won’t stop yapping about what they want for Christmas. They have just one request for Santa — a calculator.

Maybe it was their enthusiasm (“Hey ma’! I’m gonna add so many numbers,” promises Malkovich) or their curiosity (“do 89 times 56… Woah!” hollers Armisen), but I saw myself in those characters. When I opened my first TI-84 Graphing Calculator in 8th grade, I felt a rush of joy. The new buttons piqued my interest. What was sin, or cos? I didn’t want to be a lumberjack, why was there a “log?” And don’t even get me started on the graphing.

I’m an unapologetic calculator fiend. But when I first sat through my standardized exams and heard about the tons of acceptable or (gasp!) forbidden calculators, I wondered if my trusty TI-84 was the best out there. This post seeks to answer that question: what is the best calculator for the SAT or ACT?

So buckle up, nerds. Let’s do this.

No Calculator:
Both the SAT and ACT state that all of their math problems can be solved without a calculator. And if you have infinite time and you were trained as a NASA scientist in the era of Hidden Figures, they might be right. Although a portion of the SAT requires you to ditch your mechanical best friend, you’ll probably need a calculator to solve a majority of the math problems. Even if you don’t, you have a limited time for each section (55 minutes for the SAT and 60 minutes for the ACT), and using a calculator to compute massive addition problems will save you lots of necessary seconds.

Given the difficulty of the math sections, many may wonder why the SAT and ACT even argue that their tests can be completed without a calculator. It’s likely because the SAT and ACT are standardized exams and therefore can’t discriminate between students fortunate enough to have an advanced calculator and those who can’t afford it.

Knowing that the SAT and ACT are technically designed to be calculator-free exams can actually be an advantage. It’ll save you from what many esteemed professors have dubbed the “Wait… That’s Too Hard” Effect. Suppose you stumble upon a square root but none of the answers contain square roots in root form. For instance, if you find that a cube has sides of √10 units and you’re asked to calculate volume. But all of the answers are in decimals and none shows 10√10. That discrepancy — needing to calculate the exact decimal value of a radical — might indicate that you’re on the wrong track, since you’d probably need a calculator to simplify.

Scientific Calculators: TI-30X / Casio Fx-300MS
When the porridge is just right. Scientific calculators perfectly balance capability and affordability. These bad boys offer a plethora of bang for your buck. While they can add, subtract, multiply, and divide (like traditional “four-function” calculators), scientific calculators can also evaluate trigonometric and logarithmic expressions. And for under $20, I’d wager that Goldilocks would be pleased! Find the TI-30X and Casio on Amazon.

Graphing Calculators: TI-84 / Casio Fx-9750GII
El clásico. In addition to all the functionality of the scientific calculator, graphing calculators can do what the name suggests — they graph. With calculators like the TI-84 and the Casio Fx-9750GII, students can input equations and watch (in awe) as the calculator draws that graph. Be warned, however. If they’re anything like me, they may try and graph the Mandelbrot set only to crash their calculator. I assume that also happened to other people. Right?

Graphing equations is pretty, but most graphing calculators can also analyze those graphs. You can evaluate the zeroes, or roots, of an equation; you can calculate the intersection of two graphs; you can graph derivatives and integrals; you can even find local maxima and minima without ever deriving!

The graphing, however, can be a tad frustrating. The TI-84 and Casio Fx-9750GII can graph in only four coordinate planes — just rectangular, polar, parametric, and sequential. Hold your disappointment, because it gets worse: you can’t graph non-functions in rectangular coordinates! Budding Gauss-ians looking to graph conic sections like with the “normal,” x-y equations for hyperbolas or ellipses (basically, anything not in the form of “y=”) might run into trouble with the TI-84. Better warm up those parametric and polar conversions.

I’m obviously joking. A graphing calculator will be more than enough for either the SAT or ACT. And for a whooping price of around $100, they’d better be.

Graphing calculators have oodles of memory. You can save any of your calculations, define up to 26 different variables, and (my favorite feature) type in longer equations without having to press the equals sign after each term. Statistics aficionados would be excited to use the “Stat” button, which transports students to the wonderful world of standard deviation and mean. I’ve breezed through calculations involving definite integrals, infinite sums, and probabilities: just try the “Math” button.

I bet we could use a graphing calculator to quantify and graph your excitement from reading these features, but I’ve left out one very important aspect. Graphing calculators can run programs. You heard me. Programming your graphing calculator can greatly reduce the time it might take you to solve problems — and be sure to check out our recommendations for programs you can put into your calculator. Why remember the quadratic formula when you can just program it?

Well, there’s a glaring reason. Plugging numbers into a program isn’t a substitute for understanding the complicated mathematical nuance behind it. In other words, you can’t become reliant on your calculator. You still need to comprehend what you’re doing so you can work through the unexpected problems that your program might not be able to solve.

Whether you can use programmed calculators on the SAT or ACT isn’t clear. Our poor intern pored over each exam’s policy and found that on the ACT, all programs must be removed from your calculator. And even if the proctor doesn’t clear your calculators, the ACT still considers using calculator programs to be cheating. The SAT, however, hasn’t stated anything definitive that explicitly condones or prohibits programs. Regardless of whether you can use your programs on exam day, though, they’re helpful.

I’ve also been able to calculate a matrix on the TI-84. Unfortunately, however, you can’t download The Matrix movie onto a graphing calculator. But you probably can with these next calculators.

CAS Calculators: TI-89 Titanium / Ti-Nspire
Calculators on steroids. Blaise Pascal’s dream come true. More like US Army gadgets than SAT devices. On top of containing all the functionality of a graphing calculator, these beasts might just be able to land another rocket on the moon.

These calculators remind me of Emperor Palpatine’s bone-chilling screams in Star Wars: Revenge of the Sith. “Unlimited power!” he bellows, as volts of electricity shoot Mace Windu. So, too, possess the TI-89 Titanium and TI-Nspire. They’re called “CAS” — Computer Algebra System — calculators, and are essentially pocket computers. Students can plug any equation and the screen will spit back the solved equation. They can also evaluate indefinite integrals and graph in three dimensions. Wow.

The ACT has banned most of these mechanical rhinos on their exams, but the SAT still allows most CAS Calculators. If you’re unsure about your specific calculator, be sure to check the official calculator policies on the SAT’s or ACT’s websites.

Abacus:
Surprisingly, neither exam’s policy speaks on whether you can use an abacus. But I’d recommend that you stick to calculators invented after 500BCE.

So, which calculator is best for the SAT or ACT? It depends on your budget, level of comfort with math, and your learning style. Each option — scientific, graphing, CAS, or even none — can either strengthen or weaken your math ability. You’ll have access to incredibly useful functions on more advanced systems, but you’ll still need to retain your creativity and rigorous understanding of mathematical reasoning.

It’s like what Uncle Ben said: “with a great calculator, comes great responsibility.” Or something similar. I didn’t pay attention. I was too busy dreaming about which calculator I’d get for Christmas.

* This post was not sponsored. Money couldn’t inspire this level of nerdiness.

Submit your email to stay updated on all the latest news from Curvebreakers about Test Prep and Tutoring.